All in all, we stick to the view that the Copom will cut the Selic rate to 6.50% in March 2018, in what will be the end of the current easing cycle.

Talk of the Day

The minutes from the Central Bank’s Monetary Policy Committee (Copom) December meeting confirmed the message, presented in the statement, that the base case for now is a 25bps cut in February, provided current economic conditions, namely recovery of economic activity amidst wide slack, especially in the labor market, remain unchanged. The committee signals that it may be somewhat uncomfortable with the pace of convergence (from below, for a change) of inflation towards the target and stresses the importance of progress on the reforms and adjustments front in order to limit inflation risks and consolidate the environment for lower interest rates.

All in all, we stick to the view that the Copom will cut the Selic rate to 6.50% in March 2018, in what will be the end of the current easing cycle. The minutes outline a flight path for the Selic on its way to 6.75% by February. The March decision is left open. Even in the case of a frustration of expectations of reform, we believe the authorities may consider, given the magnitude of estimated economic slack, the balance of risks around the basic scenario, and the slow pace of convergence towards the target, that a little more stimulus may be appropriate. We thus keep, for now, our call that the end will only come in March, with a final 25bps rate cut, taking the Selic to 6.5%.
** Full Story here.

The BCB placed the full offering of 14,000 FX swaps. After closing, the central bank announced another roll over auction of up to 14,000 contracts (USD 700 million) on December 13.

Ratings agency Standard & Poor’s lowered Colombia’s long-term foreign currency sovereign credit rating by a notch to BBB-. The agency cited the country’s weakened policy flexibility and the “weakened fiscal and external profiles”. Additionally, S&P said Colombia’s economy continues to suffer from the effects of lower commodity prices, reflected in its high level of external debt. The agency was particularly concerned with the ability to meet the fiscal targets starting in 2019 (the fiscal rule has a 1% of GDP nominal deficit target to be gradually reached by 2024 from the estimated 3.7% deficit this year). The other two major rating agencies still rate Colombia one notch higher, at BBB. While Colombia’s sovereign debt retains investment grade, the downgrade by S&P adds to the economy’s woes.

We expect the current account deficit to come in at 3.7% of GDP this year (below the 4.4% recorded in 2016). Weak internal demand, improved terms of trade compared to last year, and higher quantum of exports will aid in the recovery. Before the 3Q data release, the central bank had highlighted improving external accounts as part of the justification to precede with a rate cuts. Hence, the latest development will aid the board’s move into expansionary monetary policy in the months ahead (we see the policy rate ending the cycle at 4.0%, 75 basis points below its current level).

Mexico’s industrial production surprised to the downside in October, with falling mining and construction activities partly offset by growing manufacturing output. Industrial production fell 1.1% yoy, significantly below our forecast and median market expectations (expansions of 1% and 0.8%, respectively, as per Bloomberg). According to calendar-adjusted data reported by the statistics institute (INEGI), the fall was slightly larger (1.2% year-over-year), pulling down the three-month moving average contraction rate to 0.8% yoy in October (from 0.6% in September). Looking at the same metric (calendar-adjusted 3mma), we note that most sectors contracted – specifically, mining (-11.4% yoy, -10.7 previously) and construction (-1.2% yoy, unchanged) – except for manufacturing (3.1% yoy, 3.5% previously). We were expecting a stronger performance of industrial production mainly because the natural hazards (hurricanes and earthquakes) – which battered the economy in September – had vanished in October.

We expect a gradual acceleration of industrial production – both in sequential and year-over-year terms – in coming quarters, mainly driven by the positive effects of firmer US activity on Mexico’s manufacturing exports. In fact, the US ISM manufacturing index is hovering at strong levels, and US industrial production (deeply interconnected with Mexico’s manufacturing sector) is gaining traction. Moreover, the fiscal consolidation – which has negative effects on both oil output and construction activity – will be much smaller in 2018 than in the previous two years, according to the 2018 budget bill. Two important risks, however, are the growing uncertainty about Nafta and the presidential elections, which could put investment decisions on hold (and thus hurt construction activity). ** Full Story here.

As expected, the Central Bank stood on hold at 28.75% at the first monetary policy meeting of December.

After the result of the mid-term elections, the Argentinian government is pushing for reforms to achieve fiscal consolidation. In fact, the Senate moved faster than had been expected and passed in late-November three key fiscal bills: the fiscal responsibility law, the fiscal pact with the provinces and the pension reform. In our Strategy Monthly Report, we argue that markets are yet to fully discount the improved outlook for Argentina’s fiscal fundamentals. Indeed, we believe the gap between Argentina’s risk premium (235bps, as of December 11) and the average LatAm ex-Argentina CDS spread (102bps) will likely narrow ahead. For this reason, we are overweight Argentina.
(see Argentina’s CDS to continue outperforming its Latam peers – Sovereign Debt Trade Idea) 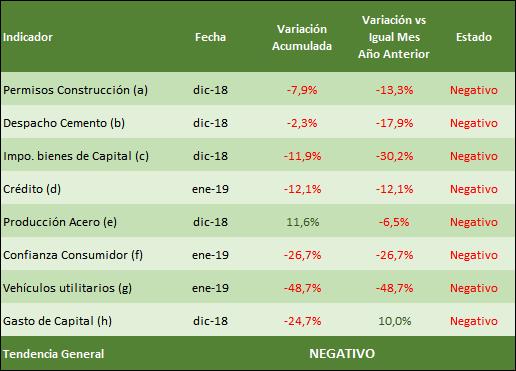